Should You Buy Property in the City or Suburbs in 2021? 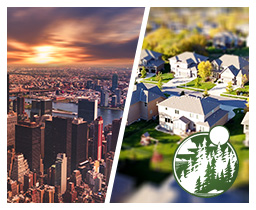 Trying to decide on urban or suburban life? You’re not alone! Since the pandemic, many Americans leaving the city for suburban life. Before hastily deciding which option is better, let’s take a closer look at life in each of these settings.

City Versus Suburb: What’s the Difference
Making a distinction between city and suburb is tougher than you think. For some, it’s all geographical: the city is at the center of a metro area, while a suburb is on the outskirts of the city’s limits.

Most distinguish a city from a suburb based on its commerce and general feel. We expect a city to be the center of business and also provide diverse housing. Meanwhile, suburbia is all about single-family homes with yards and predominantly residential.

How To Decide Between Urban Vs. Suburban Living
While the current pandemic climate may play a role in your choice between city or suburbia, the decision should ultimately come down to the type of lifestyle you want. Consider the following factors when deciding between the two:

Benefits Of Living In The Suburbs
Living Space - People who live in the suburbs typically live in single-family homes with higher square footage than apartments in the city.
Outdoor Space - A front or backyard is a big plus for suburban living during these odd times. You can also go on a walk and run without the worry of overcrowded city streets.
School Environment - While not necessarily true in every school district, suburban schools tend to have fewer students. This lower ratio enables students to receive more individualized instruction, which can significantly improve their academic performance.

Benefits Of City Living
Although COVID has made city living less appealing, there are still many benefits, and will be many more soon! Many Americans will be returning to the office, and cities will once again offer far more career opportunities than the suburbs.

While purchasing a home in a city is typically more expensive, property tends to appreciate faster in urban areas, and real estate investments tend to be more lucrative. Plus, since many decided to move out of the city early this year, real estate prices are attractive, making it a great time to buy in the city.

What truly drives people to cities is their vibrancy that fuels diverse energy and cultural wealth. Living in an area that celebrates multiculturalism offers an exciting new perspective. Plus, there’s also the food, art, and company of diverse cultures from your neighbors!

Whether buying urban or suburban, being prepared with a pre-approval letter is your best shot at getting precisely what you want. Apply online today and start home shopping with confidence!